Shadow Ring for Pyranometers, Combined with a Pyranometer Forming a Diffusometer

SHR02 is a shadow ring, used in combination with a pyranometer to form a “diffusometer”. The ring will prevent direct radiation from reaching the pyranometer from sunrise to sunset, so that the shaded pyranometer measures diffuse radiation only. SHR02 is used with Hukseflux pyranometers such as SR30 and SR20. These models have very low zero offsets, leading to higher accuracy diffuse measurements than attained with competing models. 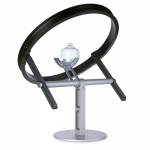 SHR02 is a practical metal shadow ring that helps making diffuse solar irradiance measurements with pyranometers. The shadow ring, also known as a shadow band, prevents direct radiation from reaching the pyranometer. The combination of a shadow ring and a pyranometer is called a diffusometer by the ISO 9060:2018 standard. The compact SHR02, combined with a Hukseflux pyranometer, has several advantages over competing models. 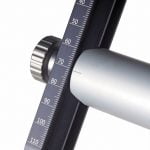 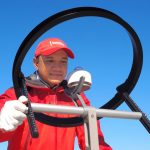 The altitude of the sun varies throughout the year and this influences the shadow cast by the shadow ring. Aside from adjusting the shadow ring on a regular basis to compensate for this, it should be taken into account that part of the diffuse radiation obscured by the shadow ring will change. Hukseflux provides a specifically tuned model that will aid the user in setting up the SHR02 without the need for in-depth knowledge of diffusometers. In the SHR02 manual a set-up table with required correction factors for the measured diffuse radiation is provided, for a range of latitudes and declinations. The manual also provides theory for creating individual models when higher accuracy is required. 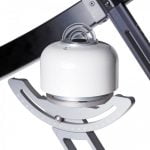 Compatible pyranometers are SR15 series and SR30-D1. With the optional mounting adapter also models SR20, SR20-D2, SR22 and SR25 can be combined with SHR02 to form a diffusometer. A pyranometer is not included in SHR02 delivery.