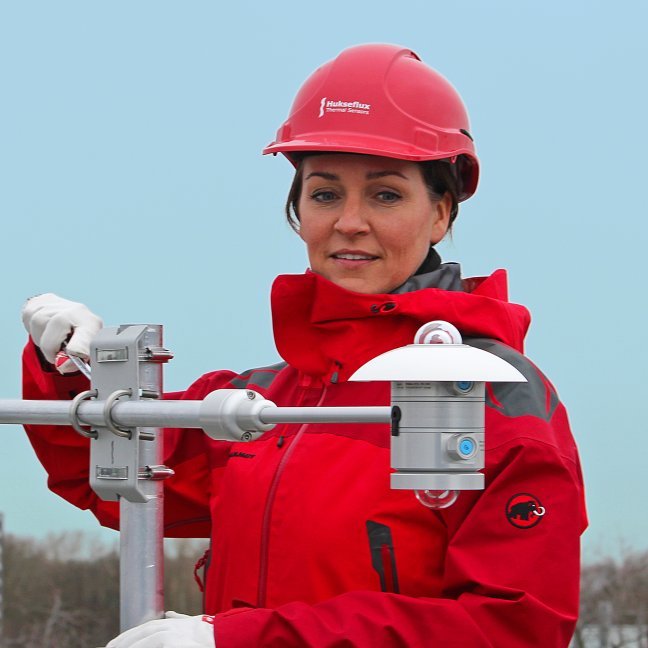 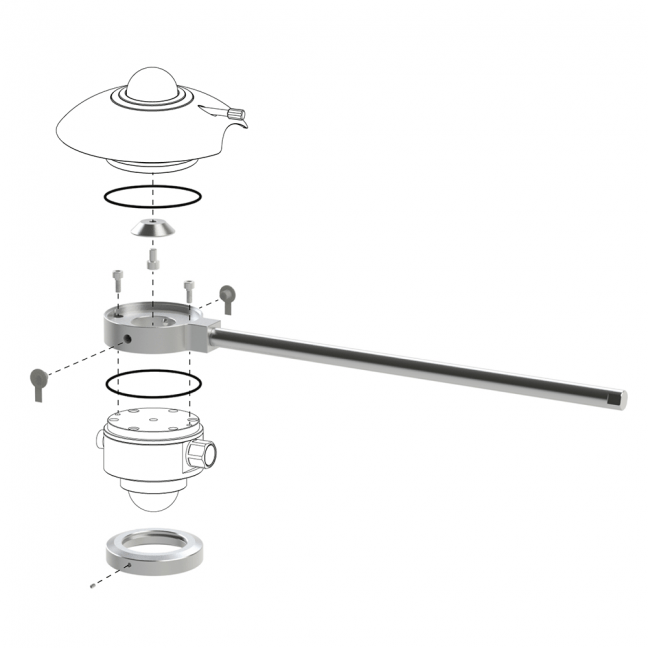 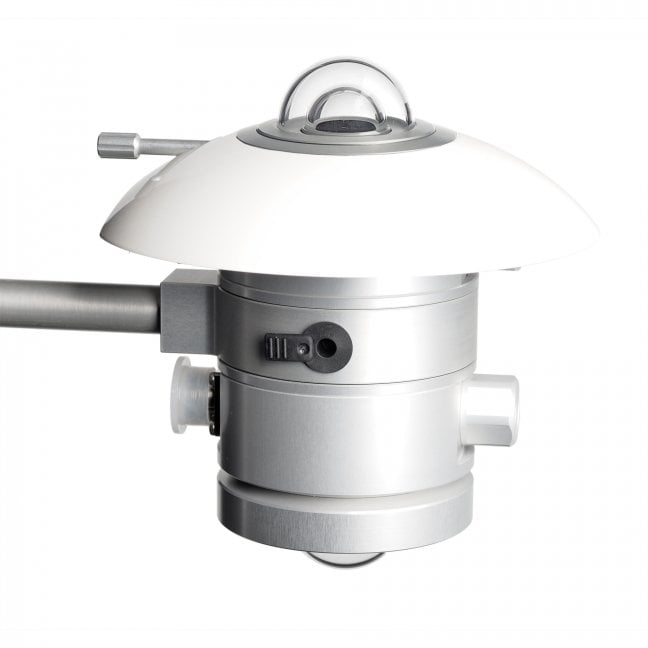 Hukseflux offers a practical range of mounting and levelling fixtures to construct albedometers from its popular pyranometers. Albedometers are increasingly popular in bifacial PV module monitoring. AMF02 allows you to combine two SR11 or two SR20(-D2) pyranometers into one albedometer. The modular design facilitates maintenance and calibration. The AMF02 albedometer kit includes a mounting fixture and a glare screen. ALF01 is a levelling fixture that may be combined with AMF02, and helps levelling the instrument.

Albedo, also called solar reflectance, is defined as the ratio of the reflected to the global radiation. The solar albedo depends on the directional distribution of incoming radiation and on surface properties at ground level. Albedos of typical surfaces range from about 4 % for fresh asphalt and 15 % for green grass to 90 % for fresh snow.

You may use one AMF02 albedometer kit and two pyranometers of model SR20 to construct an albedometer of Spectrally Flat Class A, the highest accuracy class according to ISO 9060 (formerly known as ‘secondary standard’). AMF02 may also be combined with model SR11 pyranometers to construct a Spectrally Flat Class B albedometer.  The modular design facilitates maintenance and calibration. By taking the instrument apart you can use normal indoor calibration facilities for instrument calibration. SR11 and SR20 pyranometers are supplied with several outputs; analog millivolts, 4-20 mA current loop, and Modbus over RS-485 are the most commonly used.

AMF02 is easy to use. It allows you to combine two separate SR11 or SR20(-D2) pyranometers into one albedometer. Besides the two pyranometers and the AMF02 kit, all that is needed is a set of tools. Required tools are hex key nr. 2,3,4 and 5. Mounting instructions are delivered with AMF02. AMF02 also includes a glare screen. A glare screen is a metal ring and is mounted on the downfacing sensor. At solar elevations of < 5 °, when the sun is just above the horizon, the glare screen prevents solar radiation that is measured by the downfacing sensor. This is important because it would lead to unrealistic albedo measurements. Modern data quality assurance can also attain the data quality by calculating solar elevation and rejecting any data at solar elevations below a certain value for example < 10 °.

How does a pyranometer work?

In order to attain the proper directional and spectral characteristics, a pyranometer’s main components are:

•    a thermal sensor with black coating. It has a flat spectrum covering the 200 to 50000 x 10⁻⁹ m range, and has a near-perfect directional response. The coating absorbs all solar radiation and, at the moment of absorption, converts it to heat. The heat flows through the sensor to the sensor body. The thermopile sensor generates a voltage output signal that is proportional to the solar irradiance.

•    a glass dome. This dome limits the spectral range from 285 to 3000 x 10⁻⁹ m (cutting off the part above 3000 x 10⁻⁹ m), while preserving the 180 ° field of view angle. Another function of the dome is that it shields the thermopile sensor from the environment (convection, rain).

•    a second (inner) glass dome: For secondary standard and first class pyranometers, two domes are used, and not one single dome. This construction provides an additional “radiation shield”, resulting in a better thermal equilibrium between the sensor and inner dome, compared to using a single dome. The effect of having a second dome is a strong reduction of instrument offsets.

•    a heater: in order to reduce the effect of dew deposition and frost on the outer dome surface, most advanced pyranometers have a built-in heater. The heater is coupled to the sensor body. Heating a pyranometer can generate additional irradiance offset signals, therefore it is recommended to activate the heater only during night-time. Combining a heater with external ventilation makes these heating offsets very low.

Why use a pyranometer?

There are good reasons why pyranometers are the standard for solar radiation measurement in outdoor PV system performance monitoring.

The purpose of outdoor PV testing is to compare the available resource to system output and thus to determine efficiency. The efficiency estimate serves as an indication of overall performance and stability. It also serves as a reference for remote diagnostics and need for servicing.

The irradiance measurement for outdoor PV performance monitoring is usually carried out with pyranometers. Some standards suggest using PV reference cells. Reference cells are (with some minor exceptions) unsuitable for proof in bankability and in proof of PV system efficiency. Pyranometers are and will remain the standard for outdoor solar energy monitoring.

From a fundamental point of view:

How do I choose a pyranometer?

Choosing the right pyranometer for your application is not an easy task. We can offer assistance. But first, you should ask yourself the following questions:

When discussing with Hukseflux, our recommendation for the best suited pyranometer will be based on:

The ISO 9060 – 1990 standard is up for revision. The new 2018 version of the standard will be slightly different from the 1990 version. The new version of ISO 9060 includes three instrument accuracy classes A, B and C, and a special extension of every class “Spectrally Flat”, which is recommended for Plane of Array (POA), albedo, and reflected solar measurements.

Our pyranometer selection guide offers practical guidelines for choosing a pyranometer. The application of pyranometers in PV system performance monitoring according to IEC 61724-1 is highlighted as an example. Sensors specific for diffuse radiation and meteorological networks are also addressed in this selection guide.

What is the difference between a pyrheliometer and a pyranometer?

A pyrheliometer is used to measure Direct Normal Irradiance (DNI). DNI is defined as the solar radiant flux collected by a plane unit surface normal to the axis pointing towards the centre of the sun, within an optical angular aperture. DNI is composed of the solar irradiance within the extent of the solar disk (half-angle 0.266 ° ± 1.7 %) plus some circumsolar radiation.

A Better Solar Radiometer for the Energy Transition