NR01 is a market leading 4-component net radiometer, mostly used in scientific-grade energy balance and surface flux studies. It offers 4 separate measurements of global and reflected solar and downwelling and upwelling longwave radiation, using 2 sensors facing up and 2 facing down. NR01 owes its popularity to its excellent price / performance ratio and major improvements relative to comparable instruments. Advantages include its modular design with 2 pairs of identical sensors, low weight, ease of leveling, and low solar offsets in the longwave measurement. The unique capability to heat the pyrgeometers reduces measurement errors caused by dew deposition. 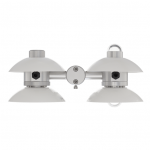 NR01 Measures the 4 Separate Components of the Surface Radiation Balance

NR01 measures the 4 separate components of the surface radiation balance: downward and upward solar and longwave radiation. The solar radiation sensors are called pyranometers and the longwave sensors are called pyrgeometers. From these 4 separate components the net radiation is derived. For calculation of sky- and surface temperatures, it is necessary to compensate for irradiated heat by the pyrgeometers themselves (Stefan-Boltzmann law). A Pt100 temperature sensor is included in NR01’s body for that purpose. Sunshine duration may be estimated according to the WMO approved pyranometric method. 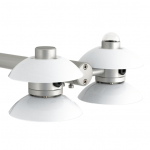 NR01 Operation
Using NR01 net radiometer is easy. It can be connected directly to commonly used data logging systems. The irradiance levels in W/m2 are calculated by dividing the NR01 outputs, small voltages, by the sensitivities. The longwave irradiance should be corrected using the instrument body temperature. The sensitivities of all sensors are provided with NR01 on its product certificate. 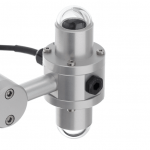 NR01 Benefits
In order to prevent condensation of water on the pyrgeometer windows, NR01 has internal heating close to the pyrgeometers. This keeps the instrument above dew point. As water blocks longwave radiation, heating will improve the reliability of longwave radiation measurement, in particular at night, when the risk of condensation is highest. Solar offsets in the longwave radiation measurement are very low. NR01 net radiometer has a modular design with 2 pairs of identical sensors: it is possible to take the instrument apart and easily replace individual sensors, and recalibrate them in using the same procedure. Features like these have made NR01 net radiometers popular in energy balance and surface flux studies. In addition, NR01 is practical to mount; it is much lighter than competing models and a 2-axis levelling assembly is included. The levelling assembly fits a 1 inch NPS tube (the tube’s recommended outer diameter equals 33.4 x 10⁻³ m). With the NR01 shim, included in NR01’s delivery, a ¾ inch NPS tube may also be used.